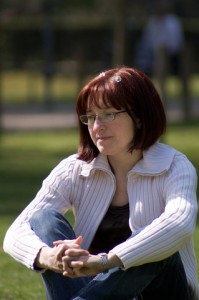 My mom died when I was 19. She was diagnosed with breast cancer when she was 31 and she was only 43 when she died.

I am a Motherless Mother. I know I’m not the only one in Single Mothers by Choice (SMC). I decided to write about this topic when some of the moms talked on our online forum about their mothers doing childcare for them, either regularly or when the child is too sick to go to daycare. I thought, “They don’t know how lucky they are to have a mom who helps out that way”—but the more I thought about it, the more I realized this was only one way that I missed having a mom.

My mother passed away when I was 19. She was diagnosed with breast cancer when I was 8 and was ill for most of the next 12 years. Because of our family dysfunction and her illness, she and I were estranged from the time I was 14 until shortly before her death. I barely spoke to her during that time and we only reunited when it was apparent that she was truly dying. Her death at age 43 was for me the ultimate abandonment as well as a glimpse into my own future. I imagined my life would end as hers did, ravaged by cancer, unfairly too young to die.

I was afraid to become a mother, frightened that I would repeat the abandonment of my childhood. Hope Edelman writes of this phenomenon in her book Motherless Daughters: A Legacy of Loss. Even women who lost their mothers at an older age than I was, approach motherhood with this fear. I couldn’t imagine bringing a child into the world, knowing that, if my fears came true, it would have to navigate the world without its mother. Yet in spite of this, the intense desire to mother a child was part of my daily consciousness. While my preadolescent friends were planning their weddings, I was choosing baby names. When they were swooning over Davy Jones and Greg Brady, I was being Samantha Stephens and mothering Tabitha. I hoped against hope that someday I would be someone’s mom.

At age 31, I was as old as my mother had been when her cancer was diagnosed—and to my surprise, I did not have cancer. Five years later, I was still remarkably without that diagnosis. I began wondering if I might live longer than she had. As I approached the end of my 30s, I realized mothering would soon be a “now or never” proposition. I had spent years of work with a therapist, reevaluating my upbringing, adjusting my attitudes, learning to look at the world in a different way. And I felt ready to fulfill my lifelong dream. At age 40 I gave birth to Judith Deborah (Judy), whom I named in memory of my mother.

I had become a mother without really having had one…at least after my youngest years.
I imagine that most women, when they become mothers, turn to their own mothers for assistance, support, and to learn how to be a mother. But my mother wasn’t there to turn to. And as an SMC, I didn’t have a mother-in-law, either. Just one of the perks—or perils—of choosing this life, I guess.

I did have a generous friend who paid for the assistance of a post-partum doula, who showed me how to hold, carry, feed, bathe, and burp my daughter. She held my hand when I was overwhelmed at the enormity of what I was doing. She did laundry and cleaned the cat box. She reminded me to eat, drink, sleep and shower. She came with me the first time I went to the grocery store. And with every sympathetic look and action, with every moment of assistance from her, I was acutely aware that this was not my mother, and my mother would never be there to help me.

I also understood the scope of the task I had undertaken: I wished to be a good—no great!—mother, without having had one.

I fantasize about being able to call my mother and ask, “Did I do this, too?” after Judy does something particularly adorable, and I wish Judy had a grandmother to sweep in to take her to a fancy restaurant for a special birthday lunch. More realistically, I wonder whether my mom and I would even be on speaking terms if she were still alive. After all, we had quite a rocky time when we still lived in the same neighborhood. I will never know how—or even whether—we would interact with each other.

I am overwhelmed with love for my daughter, at times that feeling makes me breathless and teary-eyed, and I know in my heart of hearts that at one time my mother probably loved me that way too. I wish I could call her and ask her “What happened?” with regard to those years we didn’t speak, when she wouldn’t invite me over for dinner, when I couldn’t send her my high school graduation announcement. I want her to tell me what went wrong so I can avoid it with my own kid. But I guess I’ll have to figure this out for myself.

I worry because I have no role model for growing old. What will it be like to be 50 or 60—with no one to ask about it? I have no frame of reference for what an adult woman’s relationship with her mother can be like. I scrutinize my friends whose mothers are active parts of their lives, trying to figure out what they do we1l, and wondering if my daughter and I will be able to have some of it in 10 or 20 years. There seems to be so many things that we’re never taught are but nevertheless supposed to know—and I suspect that knowledge is supposed to come from a mother.

The reality of being a mom, even for a partnered woman with a close bond with her own mother, is that it’s hard. I long for concrete support, the assistance that might make the difference between a frazzled dash from early waking to late collapse into bed, versus a peaceful stroll through motherhood. I long for the wisdom of someone who has already done this, has guidance to offer, someone to pitch in when I am overwhelmed, and who will loudly declare her love for me and my daughter—no matter what. I know I am wishing for the perfect mother…and she does not exist…but still…I wish anyway.

An SMC that I know has a close relationship with her mother. She knows she’s lucky to have another adult around, especially when one of the children is sick. She relies on her mother for guidance, assistance, and suggestions but mostly for emotional support. She values her mother’s wisdom and considers her mother a co-parent to her children. But this SMC has also noted that her mother can be critical and disrespectful to her, oftentimes in front of her own children. She wishes her mother would treat her less like a daughter and more like an equal.

Another SMC has deliberately done things quite differently from her own mother. They are close, but the SMC has to constantly remind her mother to watch her boundaries, warning, “We are doing it another way in my family, please respect my wishes and do it the way I choose.” Because of their disagreements, this SMC relies on her mother less than she otherwise might. But this grandmother and grandchild have a wonderful bond, and the SMC treasures their relationship. It helps me to hear about these wonderful and flawed mothers of my SMC sisters.

At the end of the day, I am who I am, and my daughter is who she is, and my mom died when I was 19. Those things are all linked. The fears and experiences I had as a younger woman helped to shape who I am as an older mom. How I am with my child has and will shape her into the person  she will become. For better or worse, this is all Judy and I have. Everyone has people in their lives who help and people who don’t. We all have things we wish were so and things we wish weren’t so, as we pursue our dream of mothering our children in the best way we know how.