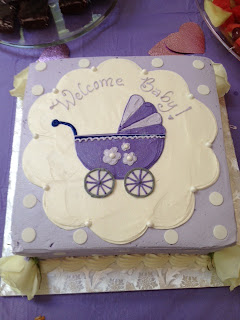 Sunday was my baby shower, a brunch at S’s house, thrown for me by two of my friends, S and J,

I was SO impressed!! They exceeded any expectations I may have had. And I honestly didn’t even know what to expect – I figured just brunch at S’s house. But the details… They had thought of everything!

They somehow printed pictures of the same image on sticky paper and put them on the bottom of clear plastic plates.

A week or two before the shower, S emailed me asking for me to send her my favorite ultrasound picture. I didn’t know what it was for, but knew it had something to do with the shower. She framed it in a black frame with white matting around it, and had everyone at the shower write little messages to me and/or the baby with a Shar.pie marker. They also made cake pops and put them in little bags with a little purple ribbon to give out as party favors. There were chocolate mint brownies, decorations, orange juice and mimosas.

They also had a page for everyone to fill out their guesses as to the baby’s birth date, weight, and length. I guess I’ll eventually have to let everyone know who came closest!

There were about 15-16 people, including me, my parents, and my sister, and S and J and both of their moms, but not including my friend K’s 10-week-old baby. He was just a bonus. 🙂

We mingled for a little while, then everyone ate brunch, and then we sat down so I could open the gifts. But first, we played this one game that my mom just really wanted to play…

I had specified that I really didn’t want to play any of the typical baby shower games like guess the flavor of the baby food or the baby food in the diaper thing (whatever that game is!). But my mom had gone to another shower recently where they had a fill-in-the-blank nursery rhyme contest, and she really wanted to do the same thing at mine, so I let her. Everyone had a pretty good time with it, and my friend L won the prize for the most correct answers.

A lot of people did a pretty good job of buying things from my registries. Some people got something off my registry and then something of their choosing. But I didn’t get too many clothes, which was good, because I have so much clothing already. Of course my sister got her two outfits that say “Cool Like Auntie” and “My Auntie Rocks”, and one friend got her a very cute outfit, including shoes. This kid has a bigger shoe collection than me, and she’s not even born yet!!

The prize for most creative and original gift goes to my friend L, who won the nursery rhyme contest. L and I know each other from a camp where I volunteer, and where she goes with her two children. It’s a camp for families that have a child with cancer or another life-threatening illness. L and I know lots of other moms who also go to this camp with their families, so she sent out an email to gather quotes and pictures, and then created this book for me called “Mothers Book of Wisdom”. Each page is a quote from a mom I know, giving little bits of wisdom or advice, along with baby/young child pictures of her kid(s). It’s so unique and I love it!

I had a great time hanging out with everyone, talking baby and baby stuff, eating good food, and just being able to relax for a little while and enjoy myself. Everyone seemed to have a good time, and even my dad, who said he was only going to come in for a little while, ended up staying the whole time. I had brought my camera, but when I realized that so many other people were taking pictures, I decided to just get pics from everyone else, so I didn’t even have to worry about that.

The shower definitely exceeded my expectations and I had a really, really nice time. I’m so grateful to everyone who came and helped make it a special day.