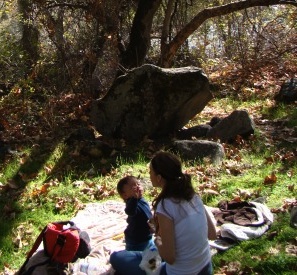 When I turned thirty-five the last thing on my mind was becoming a mother. I had spent my late teens, twenties, and early thirties so wrapped up in myself; the thought of having the responsibility of a child was submerged somewhere between marriage and home ownership.  I was content being a perennial student, keeping a day job, and sabotaging potentially long-term relationships.  Then, some time in my thirty-fifth year, an unprecedented urge pierced my thoughts, rattling my body like an alarm clock, only this was purely biological.

I thought there must be other women like me.  There were.  Single Mothers by Choice (SMC) was founded in 1981.

I pulled the top down to my Jeep Wrangler, wearing my skinny jeans, and drove to my first SMC meeting.  I walked into a room of tired-looking moms whose kids were all around the same age.  They undoubtedly drove safe cars with secure car seats that smelled of sour milk and stale crackers.  I felt like an outsider at a mommy’s group, not to mention I was the youngest woman in the room.  Then we all got to talking, and that’s when I heard the stories.

One woman had tried getting pregnant for six months before she discovered she had cysts in her ovaries that were preventing fertilization.  Another, at age forty-three could not produce follicles that would mature into an egg.  She ended up having to implant another, younger woman’s eggs.  Another woman had to give up her dream of a biological offspring and ended up going through the daunting process of adoption.  The majority of the women had had to resort to in vitro fertilization (IVF) because, they said, they had waited too long, their eggs were too old.  They had spent tens of thousands of dollars, taken fertility drugs, and had gone through the invasive IVF procedure of removing and replacing their eggs.  I had no idea how complicated getting pregnant could be.

I left the meeting feeling an increasingly urgent desire to procreate as fast as I could.  I did not have tens of thousands of dollars.  I did not even know if I had whatever it would cost to do the least invasive procedure, which was the equivalent of the turkey baster only with more accurate tools and in a doctor’s office.  The next month I went to a different meeting and although there were less kids and more women in the thinking and trying stage, I still noticed I was the youngest woman there.  Was I being impulsive wanting to have a baby on my own at thirty-five? Should I wait a few more years to find Mr. Right?  Wouldn’t I then risk being in their position?  I was up against a rock and a hard place so I did what I always do when I get in that position: I followed my gut.

Choosing a sperm donor was a piece of cake.  SMCs can talk for hours about the process of choosing their donor.  Daunted by all the variables from the donor’s father’s health to the donor’s college major, many women craft detailed spreadsheets trying to narrow down their choice.  By far, the most difficult decisions are intuitive.  You could settle the pros and cons of height and hair color, but what if the donor with perfect physical stats claims that his greatest talent is whistling while the donor with less than perfect stats can play the piano?  Luckily, I did not have to make a spreadsheet or labor over several portfolios of potential donors because I knew from the start that I wanted a baby with Mexican heritage and once that criteria was factored in, with the majority of donors being WASP college kids, I was left with a whopping six donors to choose from.

I was surprised to discover I had to personally deliver the “specimen” to the doctor’s office.  It came in a tank of liquid nitrogen packaged in a cardboard box.  I was told it would keep for seven days so I had to be sure to time it with my ovulation, my doctor’s availability and just hope I didn’t end up ovulating over a weekend when the office was closed.  When my ovulation predictor kit indicated I was close to ready, I went in for a sonogram.  There were four follicles, one of which would hopefully mature into an egg and meet up with the specimen.  Then I had to wait two weeks.  Two very long weeks.  The fact that a woman of  prime child bearing age averaged seven tries before getting pregnant did not console me.  So when my period came I took it in stride, started taking my temperature in the morning again.

When I got pregnant on the second try, I felt apprehensive about telling my fellow SMCs.  We went around the room updating the others on our latest developments whether it was a thinker broaching the subject with her mother and discovering in no uncertain terms that her mother would have nothing to do with a child born without a father, or a tryer lamenting that she had depleted her entire savings account in the process and did not know how she would afford to continue to try.  When my turn came, beaming with the news that I was pregnant, I braced myself.   The room bubbled in excitement and congratulations and I realized what I had up until then failed to see: with all that I did not have in common with these women, none of my differences could diminish the one, all-consuming similarity we shared.  We wanted to be moms.  We wanted to love and raise a child.

At twenty weeks, I went in for another sonogram.  “Do you want to know the sex?” my doctor asked.  When the doctor pointed to my baby’s penis, indicating he was a boy, it was like he had announced its birth: “It’s a boy!”  What had up until that moment only been an idea, although very apparent both physically and emotionally, suddenly became real.  I was having a baby!  A baby boy!  For some reason knowing the sex turned me from a pregnant woman into a mother.

I called my brother and then my mother and I went home.  When I joined a prenatal yoga group several weeks later, and it came time for me to share my story, all the mothers who had gone the traditional route with a man, looked at me with eyes of admiration and pity alternately.  “Didn’t I feel lonely after I found out it was a boy and he wouldn’t have a father?”  The thought had never dawned on me.  I was more concerned with the phenomenon of that moment when I became a mother upon knowing my baby’s gender.  I remember going home and looking through the archives of the SMC Forum, discovering other women had gone through the same sudden epiphany.  How lucky I was, I thought, to have this community of women who knew they deserved to fulfill the most important role of their life: motherhood.