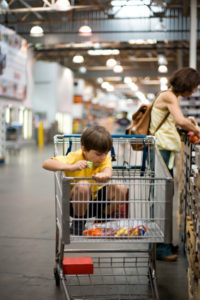 If you are a Single Mother by Choice (SMC), you know the question to which refer. I’ve waited anxiously for my son to ask the Daddy Question. Everything I’ve read says our young children are eager to know more about their unique family structure and origins. As soon as they learn the name for people in their home and for the people in their friends’ homes, children are supposed to ask. So I waited. I prepared. I rehearsed. You wouldn’t think it would take this much planning just to present the truth. I came up with my script. I wrote out the words. I revised them as I practiced the conversation. I bought picture books that other moms said were good for telling and talking. I read those books to Henry. He much preferred The Cat in the Hat and Goodnight Moon. I waited some more. When would he ask? When would he want those questions answered that I just knew were on his mind?

When he was three years, seven months and one week old. When we were at Target. When it was 5 pm and the store’s smoothie machine was broken. When everyone had had a long day and no one had eaten for hours. When his toddler brother was having an ear-shattering, no-holes-barred tantrum in the peanut butter aisle. That’s when.

His voice was barely above a whisper. Or maybe his normal volume was muffled by his brother’s screams. I heard him clearly though. For a split second, I tried to convince myself that I hadn’t. This can’t be happening here. This is not how I planned it. Just to be sure, I got down to his eye level and asked him to repeat himself. As much as I hated that it was happening in this setting, I wanted to make sure Henry knew it was okay to ask. It’s okay even if people are staring at us while our cart and a bellowing toddler block aisle 8.

I prayed that I would remember my lines. The truth as told in developmentally appropriate language. All I needed to do was to say the words I’d rehearsed for years. All of Henry’s caregivers have a copy of the script typed and ready at a moment’s notice in case I wasn’t around when he asked The Question. Why hadn’t I stuck a copy in my purse? Now I was going to have to improvise and hope I didn’t ruin the entire scene.

“Or two daddies,” he interjected.

“Or two daddies. In our family we have a mommy in our house. That’s because your mommy wanted a baby to love. I wanted one very much. But I didn’t find a daddy. So I went to the doctor.” At this point, Henry actually turns to his screaming sibling and says,

“Yeeeuhm, sshhhh, I can’t hear mommy.” Talk about pressure; he really wanted to hear this.

I cleared my throat and continued, “The doctor gave me some medicine so I could have a baby. I was very, very happy when I had my baby: YOU! (Big kiss.) Then I went back to the doctor for some more medicine and had another baby.”

“Leeeuhm!” “Yes, Liam. And I love him very much.” But I really wish he’d be quiet right now.

And that was that. If I had it to do all over again, I would have said some things differently. I would not have said “medicine”. Where did that word come from? It wasn’t in the script. I would not have used the word “just” repeatedly implying only or lacking. But we were in Target surrounded by shelves of processed foods and weary shoppers. I did my best in the moment.

The moment passed and Henry became distracted by the macaroni and cheese boxes. I have a case of organic white cheddar dinners in our garage but when Henry asked for Kraft Toy Story 3 mac ‘n cheese, I couldn’t get it in our cart fast enough. Then he asked for a second box for Liam. Yes, of course you can get another one. Anything you want. Please let’s just get our little family out of this store and back to our tiny home. Let’s eat tv dinners, watch cartoons and act like nothing has changed. Because, when you think about it, nothing has.

7 thoughts on “The Question Gets Asked…”