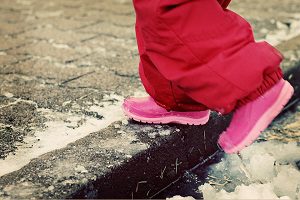 As I am typing this, my five-day-old baby boy sleeps soundly, fetal position, curled tight against my body. It’s as if I’m still pregnant, his quiet presence barely there except for the mild ache in my back.

I’m 39 years old, single, and I’ve been out as a lesbian since my teens. I am a performer (actress, singer/songwriter and occasional Lady Gaga impersonator), and I have been longing to be a mother since I was four years old.

“What do you want to be when you grow up?”

“The first female astronaut. And a mommy!” I’d answer, my grin barely contained within my gleeful face.

At age 19, I came out to my mom, and she said, “This is really cliché, but I always pictured you with a white picket fence, a husband and kids.” “Nothing’s changed, Mom,” I replied, “I’m still the same person. I still want that. I just want it with a woman.”

My twenties were filled with black box theaters, Broadway auditions and national tours as a singer/songwriter, selling CDs from the back of a junk car I bought off Craigslist. I had girlfriends, wild passions and devastating affairs. Throughout the roller-coaster romances, I longed for a steady relationship that eventually would lead to marriage and a family.

I was shocked when an early girlfriend admitted she didn’t picture herself getting married because she assumed it was never an option. “But we could have a commitment ceremony,” I stammered, “Who cares about the law?” She simply replied, “It just never seemed possible.”

Then, at age 36, my beloved stepfather passed away. His death left a hole in the fabric of our family. Years before, I had buried my grandparents, but burying a parent felt different. I could see myself next in line, and felt abrasively aware of my own mortality. “It’s time,” I whispered to my girlfriend in the night, “time to have a baby.” The longing was getting too painful to ignore. Unfortunately, she had come out later in life and wasn’t anywhere near ready. I knew this was my cue. It was my cue to have my baby.

Can you imagine the thrill of the realization that I didn’t need anyone to start my family? Fertility may be a ticking clock, but love has no deadline. Throw your hat up into the air, Mary Tyler Moore, because sisters are doing it for themselves!

So I did what any “type A” New Yorker would do. I marched straight into the Center to an LGBT Planning Parenthood group, made an appointment with my obstetrician to get my fertility checked and bought some sperm.

But you should hear some of the reactions I got.

“Why are you buying sperm? Why don’t you just go to a bar and sleep with a guy?” My response? “Uh, yeah, ‘cause having unprotected sex with men is totally a safe and responsible way to bring a human into this world. Plus, as a lesbian, having sex with random guys is definitely something I am into.”

And when people found out I was choosing to become a mother as a single woman (or, a single mother by choice), I got reactions such as: “You’re choosing to be a single mother? As a mother myself, I’m concerned for you. Do you know what you’re getting yourself into?” My reply? “No. I have no idea. I’m a 39-year-old, financially independent woman, yet I never thought this through.”

However, the most frustrating, and surprisingly common negative comment was: “You know your life is going to change, right? It will never be the same.” And I would think to myself, “Well, I certainly hope it will change. I want more meaning, more depth and more love in my life. In fact, I’m banking on it changing.”

I assumed the biggest hurdle was coming to the decision to become a single mother by choice. I would then get pregnant, have my baby and start my new life. But a trip to the OB—and later a fertility specialist—confirmed that I had Diminished Ovarian Reserve. That meant, at age 36, my egg quality was poor, and I was already in the early stages of menopause, hormonally speaking.

The most ignorant piece of advice I received while struggling with infertility? “Just relax, and it will happen for you.” “Yeah, totally,” I would think, “I’ll sit back, relax, watch Orange Is the New Black, and sperm will fly magically through the air, inseminating the perfect egg at just the right moment—and poof! I’ll be pregnant. Aging isn’t a thing, and relaxation solves everything.”

I did seven IUIs (intra-uterine injections), four IVFs and suffered through two miscarriages. I felt as if my body was failing me. I saw pregnant women and their babies everywhere. Worst of all was the fear that I would never find my family.

“But you look so young! My friend had a baby at 49. Just talk to your embryo,” said my well-intentioned friends. I soon came to learn, however, that just because my grandfather died at 97 and someone else’s at 74, doesn’t mean they both didn’t die of old age. In other words, even though people age differently, it’s still aging.

After the second miscarriage, I knew it was time to move on to donor eggs. I didn’t want to keep traumatizing myself with the losses, and I knew that I could love any baby placed into my arms.

Finally, in December 2014, one resilient little embryo was transferred into me, and it took. And now, that little nugget is snuggled up against me as I type.

How I Feel Today

How do I feel, now that I finally got what I worked so hard to get? I don’t think I can even express it. I am in the midst of all the changes: my hormones shifting post-partum, my world in alteration. I can’t believe my luck, and sometimes I cry over how much I love him, now and for always. Other times, I can’t trust this strange new fortune and wait in terror for the other shoe to drop.

What I do know is that I want to tell my story. I want to encourage those of us who have dreams outside the box to go for it. Children need love, but they don’t require two parents—or a perfectly rated school district. I want to break the silence surrounding infertility and lift the shame that haunts those who have suffered and their children. I want people to stop saying negative things to those of us who are single parents by choice, and I want everyone to understand that family rights involve more than marriage equality.

Most pressingly, I want to figure out if I’m an organic attachment type of parent who believes my baby should be at my breast 24/7, or if I can stand to let him cry now and then for a little peace of mind.

But mostly, right now, I want to share the dumbest reaction I ever got to my pregnancy:

“Wait… but I thought you were a lesbian.”

“Yeah, I’m not even gonna answer that one. I’ll let you stew on that for a moment, because it just might be a little more complicated than you think.”