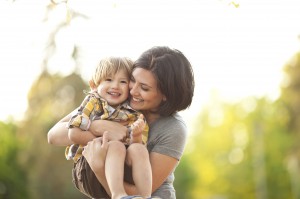 I have been pondering if/when to have a second child for quite sometime now, especially as I read about all the other SMC members who had their babies around when I had Elsie, and they are already trying for their second. And the fact that my 40th birthday is looming doesn’t help.

A little background history… I have (8) 5-day blastocysts and (7) unfertilized eggs in the deep freeze at my clinic. Elsie was the result of my first, single-embryo transplant. So I have every reason to believe that I can become pregnant with my second fairly easily.

So the questions that have been on what is starting to feel like a constant loop in my mind are:

Practicing at being Santa Claus

So, as scary as it is… I think I have decided to go for it. (Though I reserve the right to waver still.

That leads to question 2… When??  For selfish reasons, I would really love to have another June baby.  It was SO nice to have the summer off for maternity leave.  Plus on the financial side, my day care allows kids to leave during the summer (July and August) without losing their spot for the next year so it would save me a little bit of money.  So that means trying again in August/September/October.

Now the question is when.  (This is where the looming 40th birthday plays in…)  After I had Elsie, I asked my OBGYN if there was anything other than egg quality I had to worry about if/when deciding to have a second (and luckily I get to ignore egg quality since the embryos are already frozen), and she said the younger I am the better.  I had a bit of high blood pressure at the end of my pregnancy with Elsie.  Nothing needed to be done about it but lots of monitoring.  Anyway the doctor said that blood pressure issues only get worse with age so the younger I am the better.

Then there is how Elsie plays into the picture… She is already a handful.  I am hoping she is going through the terrible two’s early so we will leave them behind earlier.  (A girl can dream, can’t she??)  So hopefully by 3 she will be out of the ‘testing-boundaries’ phase. But the more I read about other mother’s experiences, it sounds like 3 can be tough too.  So do I want to wait until she is 4 to hopefully have a more mellow kid by the time I have the baby??  (It also means less of an overlap in day care costs. A huge plus there but another year older for me, a negative.)

A week or so ago, I was walking with a friend and we were discussing our lives.  One thing led to another and this very topic came up.  She asked me if I was going to have another and surprising both her and me, I immediately replied, “Yes, I am going to try in September.”  I hadn’t realized I had gotten that far in thinking.  And then I went home home and wavered, of course!!

6 thoughts on “Thinking About Having Another”