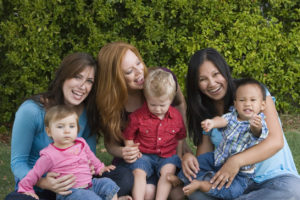 When I started my journey to become a Single Mother by Choice (SMC), using donor sperm from a bank, I thought I had thought through all possible scenarios. It was just two years ago that I realized I had not thought it all through. I had never thought about connections with donor siblings or donor families.

I had decided that I would tell my child about their conception from the start – no secrets. I imagined that one day, he or she might ask questions about the donor and I would answer. I chose an Open ID donor for this very reason. I figured, why not leave the door open if you can? Why shut it from the start. So, I figured we’d deal with the possibility of connecting with the donor if and when my child was ready or wanting.

I never factored in that I might find myself connected with other families who conceived with the same donor. I didn’t even realize that the bank we dealt with had their very own version of FB for donor families and offspring! It’s all anonymous unless you choose to go further, but I didn’t know it existed. I didn’t think about this connection at all.

In October 2014, when my daughter was 4 months old, an email hit my inbox. It appeared to be from the sperm bank, and when I clicked the links, I found myself on their connections page with a message from another SMC wanting to connect. I really wasn’t sure what to do, but curiosity got the better of me and I connected. After a couple of short anonymous messages, we discovered our children were less than 2 months apart in age, and we lived in the same city. We talked about maybe meeting up. I was excited, nervous and scared all at the same time. What can of worms would I be opening? Would this be the right decision for my daughter? For me? For my family? I had no idea.

I spoke to my Mum, my sister and my Dad. My Mum was on the fence, she knows me well enough to know I have to be the one to come to terms and make a decision. My sister and father were dead set against any contact (and still are). “They are not her family – we are her family” was their argument. I spent a few days pondering this. It didn’t sit well in my gut. It didn’t seem to be a good enough reason to me – and I had to think back to the outburst that occurred when I announced I wanted to become a mother with a donor – that did not go over well either. Maybe, the same fears that drove my sister and father to be against me having a child this way were the same fears driving their opinion on this.

I spoke to a few close friends looking for their opinions. Most were unsure and didn’t know what to say – I had to remind myself that dealing with donor conception is not day-to-day life for everyone – they honestly didn’t know. One friend (and you know who you are) told me to go for it and add them to the village I was building. It couldn’t do any harm. I researched extensively and discovered that most professionals agree that contact between donor siblings lessens the struggle with being donor conceived – it gives them a connection to a donor. In the end, I went with my gut, which from the start was screaming “do it”.

I’m so very glad that I did. I remember that first meeting well. I remember leaving feeling like I’d known her for years. The conversation was easy, we had lots in common, not just our children conceived with the same donor. For a couple of months, it was just us. We chatted regularly via email and FB and got together a couple of more times. Then, the flood gates opened.  In a very short span of time, or at least it felt that way, connections came in fast and furious. Soon there were 4 or 5 more connections. We all connected. As luck would have it, we were able to arrange a get together last year. Four SMC’s and four babies! Again, it just seemed easy and natural. We shared stories and experiences of our journeys to motherhood and our first weeks, months and year of parenting.

A few weeks ago, three of us got together with the kids for the weekend. We had a great time. We took the kids to dim sum, we had a photo shoot (in an alley – imagine the chaos with 3 under 2), we went to a splash pad, an amusement park and we had fun, laughed and helped each other. We all connected and continued to build our friendships, our families. It was another great experience. I even got to babysit a little one for two days and I fell in love with that little one – I feel so connected to her.

Others in our group have met up in their own country as well, and we are talking about setting up Skype dates, so we can all chat and the kids can see each other. I can’t wait for us to do it again. We may not all be able to get together at the same time, but we will try.

Sometimes, I feel like I’m part of a science experiment – the most awesome science experiment ever. Friends ask me a million questions and are totally intrigued and curious. They want to see pictures they want to know how it feels. It’s impossible to explain unless you are in it. The friendships that some of us have fostered feel, to me, like they have been life-long friendships, not just a year or so. It’s truly been an amazing experience.

It’s not for everyone; we have three connections who have not connected with anyone (yet). I get it, it’s a tough decision to make. It’s a big unknown for many. There is a part of me that wonders if those three families are what one would call “traditional” families – you know, mother, father child. The rest of us don’t fall into that category; we have single mother families and two mom families, so far. Something to ponder – is it easier to put yourselves into the situation of connecting with other donor offspring if you don’t have a father in the mix?

Some great articles on this topic, if you are interested: Victoria Derbyshire from the BBC: “The donor-conceived siblings connecting across the world”

Jordan Namerow, The Washington Post: “Finding, and connecting with, our son’s donor siblings”