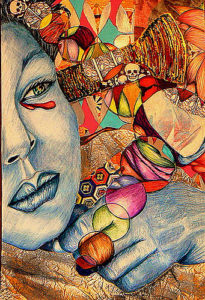 I recall learning the stages of grief in graduate school. D-A-B-D-A, my professor stated. He was providing an acronym to assist us with recalling that grief progressed through the stages of Denial then Anger followed by Bargaining then Depression and finally Acceptance. The stages appeared to make sense and seemed pretty straightforward; that is until you actually have to go through them!

I ran head-on into grief when I began to view motherhood as a reality I must experience. Why was I grieving? I had to mourn the loss of my vision for the future, my Plan A (as it’s often referred to in the world of SMC). Plan A for me meant boyfriend, followed by marriage, and then children. But that is not how life played itself out, and at the age of 42, I was left having to consider a new path: Plan B.

When I joined the Single Mothers by Choice (SMC) group, this past spring, I was pleasantly surprised to see that this process of grieving one’s “original plans” is something openly discussed by other SMC’ers. I also discovered that there were others like me – in the Trying stage. So I took months to grieve, and eventually reached a place of acceptance. I found the courage to move forward with IVF and anonymous sperm donor. I felt good about my decision and successfully went through my first egg retrieval in August. All seemed right with the world.

Fast forward two months – one Friday morning, I was sitting in a staff meeting at work, focused and productive. However, during the afternoon commute home I felt a gnawing feeling inside. Unable to pinpoint what was going on, I found myself wondering: “what gives?” Then the epiphany struck me… I was lonely. But why now, why were these feelings surfacing now? I had spent months grieving. Had many moments of gut wrenching tears, and thought I had bade farewell to Plan A. Yet here I was, in my car, on the brink of tears.

It was in that moment I realized that the stages, as taught in graduate school, theoretically occurred in a linear fashion. However, in reality, the grief process was more of a jumbled mess! And it was in that mess of emotions I was entangled.

So what did I do? I simply accepted what I was feeling. Gave myself permission to feel all of it. Reassured myself that these were just tears and this feeling was just sadness. It was in that space of making room for my emotions, that I began to feel better. I was then able to reflect on the things that cause a smile to light my face. And then serendipitously, as I exited my car and entered the grocery store, I made eye contact with a beautiful baby girl. She appeared to be about 11 months old. She sat quietly in the grocery cart, as her mother pushed her along. We, the baby and I, looked at one another, seemingly sizing each other up. I broke the stalemate first and smiled. She mirrored my smile and then started to giggle. So I of course followed her lead, and found myself giggling too.

In that brief interaction, I was reminded of all that I am looking forward to. I will continue to allow myself to feel whatever I need to feel, even when the uncomfortable emotions of sadness, anger, or grief arise. However, I won’t allow my emotions to stop me from wholeheartedly embracing this new journey I am embarking on. I will be an SMC, and though there will be some tears, I foresee that there will also be lots of smiling and hopefully, a giggle or two.