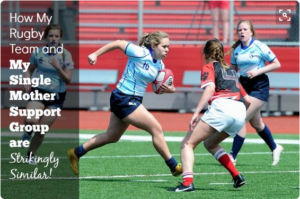 Shortly after announcing my intention to become a single mother, a friend of mine lent me a DVD of The Backup Plan, a far-fetched romantic comedy about a woman who made the same decision to go it alone, only to meet Mr. Right an hour after getting knocked up. Some of the best scenes in the movie take place at a single mothers support group. To maximize the comedic aspect, the film depicts its members as an eclectic, tight-knit group of hippies and man-haters. It was stereotypical but hysterical. It was also the night before my first Single Mothers By Choice (SMC) group meeting, so it was a tad terrifying.

Coming from a family where emotions and serious topics are preferably left unspoken or at least only used as fodder for jokes, the idea of a support group was new and uncomfortable. So walking into the SMC meeting and taking in the circle of more than forty women required a little more nerve than expected, even for someone as loquacious as I am. I was tempted to join the half-dozen toddlers corralled in the center in their attempts to flee, but something drove me to an empty chair.

That something was the need to belong. The need to know I wasn’t alone in my desire to do something a little unconventional, a little crazy. Those toddlers and pre-schoolers were more than just loud and adorable. They were proof that what I want is possible. Their moms were not only surviving the early years of single motherhood, they were finding time to go to group meetings to support and encourage other single mothers on a Sunday afternoon.

We claim to be a society that admires individuality and self-reliance. But to attempt to do something challenging, which thousands of people have already done, without reaching out for advice, support, and encouragement isn’t self-sufficient, it’s needlessly stressful and arguably stupid. Living alone for so long I’ve become independent to a fault, but I’m not foolish. I know I can’t parent alone. I also know things will go wrong, probably quite often. I’m going to need support of all kinds, including the kind of emotional support that can only come from women who’ve walked this path a few steps ahead of me.

And those women, those moms? Well, they certainly weren’t the man-hating hippies Hollywood created. They were funny, educated, diverse women who just happened to find themselves single yet still wanting to be a mom. In other words, they were just like me. I looked around and realized I wasn’t sailing into the Bermuda triangle of parenting minus a first mate and a life-vest. I was on a well-stocked, able-crewed cruiser to motherhood. Suddenly the large number of attendees wasn’t daunting; it was empowering.

My mother never understood my interest in team sports. Or perhaps she just couldn’t see past the risk of her only daughter sustaining a life-long neck injury to see the benefits. I did—sustain the injury and reap the benefits. There’s something about doing something physically and mentally challenging with a group of like-minded women that allows you to appreciate the beauty and power of yourself, your body, and your gender. That might seem awfully deep coming from a hooker. (It’s a rugby position. Honestly.) But it’s an absolute truth and a feeling I wasn’t sure I’d ever truly experience again. Walking out of that meeting of other single mothers or single mothers-to-be, I felt a flicker of that feeling resurface.

Just like with my teammates on the rugby field, getting filthy and being unabashedly aggressive, those single moms and I are doing something a little edgy, and a little risky, and a little wonderful. We are pushing boundaries set by society and ourselves. And as scary as that can be, we push on, mostly because we know the rewards will be worth it. But also because we realize we are in good company.

“After I joined SMC, I learned so much! One of the best things was not feeling alone. So many had gone before me, and if they could do it, then so could I! My local group was a great source of support and becoming an SMC was the best decision I've ever made.”