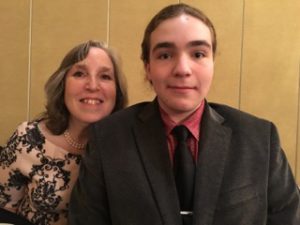 I was never a thinker. I always knew that someday, somehow, I would be a mother. I remember being a teenager and saying to myself: “Self, if I’m not married by the time I’m 35, I’ll just have a baby on my own.” In May, my son will turn 17. How the heck did that happen? It still boggles my mind.

There are mornings when I wake up and it strikes me all anew—there’s a child in the room next door and that child is mine. I’M A MOTHER. I want to scream it to the world. The word single doesn’t really enter into the equation. Yes, I’m a single mother. Yes, I did this on my own, consciously choosing to have a child who wouldn’t have a tangible father in his life. And we’re a family, a perfect little unit that suits us just fine. His friends know he doesn’t have a dad and sometimes they ask questions—but most times they don’t.

There’s a game the kids played at camp called two truths and a lie, where you tell two truths and one lie and people have to guess which is the lie. One of Marshall’s truths is that no one in his family knows his father. Said without remorse or angst. Just a part of who he is.

I was never a thinker. This has always been my destiny. Motherhood was in my soul. Sure, it’s hard, but I look at my married friends with kids and you know what? Their life is hard too. Parenthood is hard, whether you’re doing it alone or in a traditional nuclear family or in a divorced family or in a same-sex family. But parenthood is also magical. It opens your eyes to world again. It let me rediscover the wonders of this planet.

I knew nothing about dinosaurs before I had Marshall. Now? I can name them all. Who knew Star Wars and Legos could be so all-encompassing? I remember walking him to preschool when he was 3. The walk for me alone took 5 minutes. I left us 20 minutes because there were cracks in the sidewalk we had to follow; there were water access pipes that had caps that NEEDED to be spun EVERY SINGLE MORNING; there were stories to be told and songs to be sung along the way.

And now? Now we’re looking at colleges. I am savoring these times together. Because so often it seems that I am working late or he is out with friends. Even when we’re home at the same time, he’s on the computer and I’m in my room. We’re not really together. And sometimes that’s hard. But these road trips allow us time together—even if it’s two hours in the car. Conversations can be had—ones that don’t come up when we’re in the house but in separate rooms.

The tween years were the hardest ones for us, the ones where we butted heads and couldn’t seem to find common ground. Surprisingly, the teen years—his being in high school—have been relatively easy-going. Please, I hope I didn’t just jinx myself. We respect each other’s opinions. He tells me what’s going on and what he’s worried about. And I learned to listen better without always offering a solution. And I learned to not get mad as easily. He is his own person, with his own way of doing things that aren’t necessarily my way. Boy, that was a hard one to learn.

My son will be 17 in a couple of months. He was born two days after my 40th birthday—the absolute best birthday present I ever got. I was never a thinker. I was always a mother. It took a few years of trying and the stars to be aligned in just the right pattern for that vision to become a reality but I am a mother to an amazing boy. And together we forged a path and embarked on an incredible journey. Sure, we’ve made mistakes long the way but we also lit new ways of thinking and doing that fill my heart and make my soul sing. And we’ll navigate these coming years, when he will leave the nest. My days of mothering won’t be over, but they will be different and we’ll figure that out together. He has permission to tell me to back off and I have the right to say this is how I feel.