Note: This post originally appeared on our blog several years ago to commemorate Martin Luther King Day. We decided to repost it this week because of the increasing number of racial and religious crimes we have been experiencing. 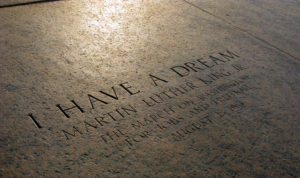 In January, we honor Dr. Martin Luther King, Jr and remember his dream.  As I drove to work on Martin Luther King Day, after dropping off my very sweet, happy boy, I realized how very blessed we are, how blessed he is, this young black American I’m raising.  And I realized how very far we have to go in this country towards racial equality and peace.

Yes we have inaugurated our first black President for the second time.  Barack Obama has been sworn into office as our 44th President of the United States of America.  I’m so proud of him, proud to be an American and to be able to bear witness to his leadership.

But it’s come with a great price in this country of mine. A great price. Fear and hatred are running rampant. And racism is as entrenched in our lives as it ever was.

In fact, I’ve been told that a few patients have said, when told that my boss is going to be out of the office and that they can see her associate….”What color is she?”

Yes, they want to know what color I am.  This is how they determine whether I’m qualified to see their children.

Not by my degrees.

Not by my knowledge and experience.

…I just want to do God’s will. And He’s allowed me to go up to the mountain. And I’ve looked over. And I’ve seen the Promised Land. I may not get there with you. But I want you to know tonight, that we, as a people, will get to the promised land!

We will get to the promised land.  I know we will. However, I am sadly sure I can look my sweet little boy in the eye and say I’ve seen the Promised Land, but I may not get there with him.

So this abbreviated list of African Americans who have made a difference in the lives of so many, certainly in my life will be on my list of people in history I have to be sure Tate learns about.  He has to learn of whence he came.  And I’m missing a LOT of people on my list.  There are many more.  And I will have to be the one to teach him, and in doing so learn myself.  Because I am concerned that he will NOT learn enough about them in any formal education in his lifetime.  This is taught by word of mouth.

And I’m forgetting I have two amazing African Americans in our lives right now who lived during the height of the Civil Rights Movement…his grandparents.  They can educate us both.  I intend for us to start as soon as we next see them.

So tonight I’m so very excited that President Obama is beginning his second term.  I am excited about all the good I know he can and will bring to this country.  I have hope that this very divided country can come back together and start to mend our very divided hearts.

May God bless us one and all and may God Bless America.