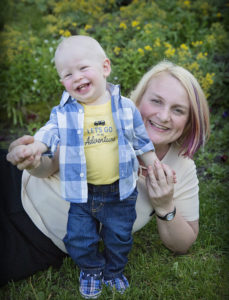 “You’re having a … boy!” I remember the moment I got this shocking news as if it were yesterday. The autumn sun blithely filtered through the patio window, as I sat at the edge of my bed and took the call from the genetic counselor. As soon as she said the words “boy,” my heart sank to the pit of my stomach and I almost fell of the bed. Thump.

That queasy, uneasy feeling stayed with me all during my pregnancy. It’s called gender disappointment and it’s real. At first though, I was really ashamed to admit it. After all, it had taken me ten tries to have this miracle! And it was a miracle indeed – after 2 failed IVFs, I had conceived… on a last unmedicated Hail Mary insemination. My baby was genetically normal and healthy! How dare I feel anything but unadulterated joy?!

Luckily, I was part of the Single Mothers by Choice (SMC) Forum, a group of like-minded single moms by choice, where I could share these guilty, teary feelings I was having. And I learned that I was not alone. I learned that many mothers of boys (and girls) had experienced similar feelings upon learning about their less preferred gender. I no longer felt alone.

Most importantly, the women on the SMC Forum gave me lots of food for thought about boys that sustained me throughout my pregnancy. For instance, I learned that boys really love their mamas, and that all the mamas with boys loved their child just as fiercely. I was informed that I would likely have much less drama in the teen years with a boy that with a girl. And I was reminded that not all boys are active, noisy climbers; just as some girls are tomboys, there are bookish quieter boys. Or that I don’t have to worry about potty training, male role models or teen boy problems just yet; I would be parenting an infant at the outset, and that I would learn everything I needed from day to day one day at a time. I learned so very many things from the SMC Forum on this topic (and many others!)…

Now that I have my beloved boy, I realize that the right baby comes to you – be it in gender or in disposition or challenges. In my case, having a boy, has urged me to re-evaluate my relationship with men, and has opened a whole new world to me: the secret world of men. If I never had a son, that half of the human species would be largely foreign to me! I also realize that, before my son, I largely ignored men, and all too often, even degraded them. But now, as my son grows, I am constantly pushed to seek out good guys, to notice and point out what I appreciate about men. I am therefore educating myself, and my son, on what it is to be a good man.

Having a boy has also forced me to identify what I understand to be a feminist male. As a strong woman myself, I feel I know — or I feel I embody– what it means to be a strong female, who can do anything she sets her mind to, who can be fiercely independent etc. I realized that if I did have a daughter, I risked projecting my notions of femininity, or feminism, onto my daughter. Or more precisely, that having a daughter would reinforce all of the strengths, but also the weaknesses I already have — such as my strong-will, my brashness, my driving ambition, risk-taking etc. Whereas having a boy, and planning to raise a feminist boy, has actually forced me to nurture those aspects of myself that I have suppressed for a long time, such as gentleness, patience, kindness, goofiness…

I think that if I did have a girl I would parent differently. I certainly would not consider gentleness and caring as core values for raising a girl since society is always encouraging girls to be gentle and meek to the point of passivity, or caring until the point of self-sacrifice. But when it comes to my beloved boy — I am so pleased when he is gentle and not rough with kitty or when he carefully picks flowers and wants them in his button-holes… Or I am bursting with pride when he sees a fellow toddler crying and he brings a toy to cheer them up… So far my sweet boy is two and a half – so has no idea about gender really – and so he delights in bright colors such as pink, enjoys cuddling dolly, and just loves having 2-3 ponytails in his hair at any given time!

In all, now that I have my beautiful boy, I could not imagine it any other way! I would never trade him in for a girl!! I shudder to think how much of the human experience I would have missed if I did not have my beloved boy…In fact, I am so in love with boyhood that when trying for a second, I am secretly hoping for another boy!! Boy, oh boy, what a turnaround!