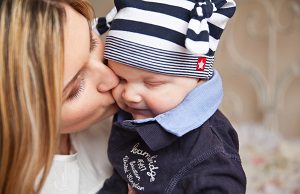 As a single mother by choice I expected the “Who’s the daddy?” question to come up. I’ve actually been surprised at the restraint people have shown when I’ve told them I’m expecting while not wearing a ring and still going by Miss. Sure, in some ways it’s none of people’s business, but as someone who is at times overly inquisitive herself, I understand it’s also natural to wonder.

Since I’ve been so open throughout my journey to single motherhood, I didn’t mind the not-so-subtle fishing of some acquaintances. (Saying, “Oh, you and your husband must be so happy!” or “Are you Miss or Mrs.?” when these topics have never previously come up, is not exactly subtle, but I appreciate the attempt at politeness.) And while some single mothers by choice are sensitive to it, I’d never be upset or angry with a stranger for assuming there’s a daddy in the picture. My getting pregnant did require some male assistance, after all.

That said, if someone brings up the topic, I’m not comfortable pretending there is a dad.

I won’t smile and nod and let people think their assumption that all families include a mom and a dad is correct, because it’s not, and people need to be exposed to all kinds of families in order to understand and accept them.

Yes, it would be easier not to explain that I’ve chosen to become a single mother to complete strangers at the doctors’ office or the maternity store, and it might be more comfortable for them, too. But then I wouldn’t be comfortable. I’m not ashamed of the way I’m starting my family and not speaking up would feel like I had something to hide.

More important than my feelings though, are those of my son. There will be a day when a stranger says in front of him, “Oh, he must look like his daddy.” Again, it might be easier for me just to agree. After all, my son may look like his donor, and to a stranger what’s the difference? Nothing. But to my son, there will be a difference. I want him to know that while he doesn’t have a dad, his family structure is just as legitimate, and special, and loving as any other. If he thinks I’m not comfortable talking about it, how can he ever be comfortable with it?

I also want others to understand that while they mean no harm in their assumptions, times have changed, and the language we use to talk about families needs to change with it. According to some statistics, ‘non-traditional’ families now outnumber ‘traditional’ families. That doesn’t mean we need to stop talking about families with moms and dads, but it does mean we need to start talking more about other kinds of families. And that starts with those of us willing to be forthright gently reminding those who ask, hint, or assume that we exist and are not ashamed or uncomfortable with whatever make-up our families consists of.

So, no, I won’t lie or even smile and nod to make others feel more comfortable. Because while they may be mere acquaintances or even complete strangers to whom the truth means little, my child needs me to tell the truth, not only to him, but to the world. Because the truth will help shape the world he grows up in—and I want that world to be educated and accepting of all the types of families that exist. Ours included.

One thought on “Honesty Over Ease: Why I Won’t Avoid the Daddy Question”