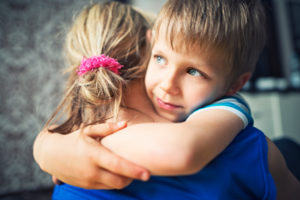 Sometimes I hear members of Single Mothers by Choice (SMC) talking about the “dreaded Daddy questions” but I don’t think it needs to be a “dreaded question”. In fact, I set things up so it wasn’t a question at all. By that I mean that from the time he was born, I told my son “our story” about how there was a mama who was sad because she didn’t have a baby, and she didn’t have a husband to be a daddy. So a nice man called the donor gave the special seeds to a doctor who put them into the mama to make a baby with her eggs, who of course turned out to be my son! (That was my version of it, I never bought any of the books on this topic). When he was around 3, he could tell the story back to me and it was just an inherent part of his self-identity, so he never had to ask the question of where his father is.

So far, at age 6.5, it’s not a big deal to him and he is pretty matter of fact about knowing he doesn’t have a dad. Sometimes I even push a little bit, to let him know that if he’s sad about not having a dad, he can talk to me about it. The last time (just a couple of weeks ago) he went into an overly fake boo-hoo routine and then said “that’s how I’d be if I were sad about not having a dad but I’m not!”

There was a time when I didn’t talk about it as much because I didn’t know how much he would start talking about it at pre-school, and I wasn’t sure that I wanted him to trigger questions that he might not have been prepared for. And we’ve revisited and revised the details as he’s gotten older, particularly after he started talking about eating the eggs and seeds to grow a baby inside his own tummy! lol!

To me, this is very similar to being open with a child about adoption. I think it should be something they understand organically, that never has to be a “I need to tell you something” conversation because they just have always known it and it’s not some secret.

I’d suggest that rather than waiting for a question that might come at a time when you are caught off guard, to think about what you feel comfortable saying, and then practice with your infant, before s/he has any idea what you’re saying. Then go ahead and initiate the conversation at an age-appropriate time.  You can clarify the details as s/he gets older.

2 thoughts on “The Daddy Questions”