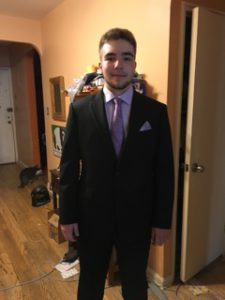 I just saw an ad for The Mystery Science Theater 3000 show. Hey, I think Marshall might like to see this. Maybe even with me. September 19. And my heart sinks a little. I am dropping him off at college on September 13. My baby will be leaving the building.

Now, don’t get me wrong. This is absolutely how it should be. And in all honestly, after 18 years of having him in my house, in my space, in my heart, it is time for him to go. But there’s a small voice inside that keeps saying: “Not yet. A little more time. One more adventure.”

If I say so myself, I have raised an exquisite human being. He is smart, funny, and kind. He has good friends—kids who like him and like being around him. He is kind to my mother, something I am not always successful at, which makes me hope he will be kind to me in my doddering years.

Now my baby is going away. Not far. Philadelphia isn’t all that far from New York City. But it’s far enough. He will be out on his own, making friends I might never meet, learning things he won’t tell me about, writing papers he won’t ask me to edit at the last minute. He is becoming his own person. And that’s exactly as it should be. I am bursting with pride at this being I created and helped form into the poised young man who stands before me today. And yet, he raised himself too. Sure, nurture plays a big role in a child’s development, but nature also roars. And my child roared!!

I know more about dinosaurs than I thought possible, but I was never quite able to master Pokemon. I tried to share my love of theater with him, but although he’s usually happy to sit through a show with me, he admits that it’s not something he would choose to do. We are heading to a Mets game next week, even though they stink once again. But ya gotta have hope. Always, right?

Soon I will drive him to college and clear my living room of all the stuff I swore I wouldn’t buy. And my house will be a little quieter, a little sadder. Another cat maybe?? But he has said the more cats I get, the less he will come home. Maybe just one more.

I am so excited for him and his future. Excited that he looks at his upcoming class schedule and is interested in the classes he will be taking. A geology major with a concentration in paleontology. Guess my driving him to all those dinosaur museums and going on a dig in Colorado paid off in the long run.

But a little quieter, a little sadder. I’ll just have to find someone else to go with to Mystery Science Theater 3000.