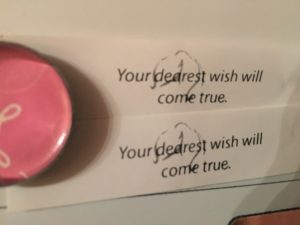 Early on the morning of Wednesday, November 6th, I was getting ready to drive to my reproductive endocrinologist nearly two hours away, where I would have a test to determine if there was a blockage in my fallopian tubes causing the problems with my lining development.  I had become incredibly disheartened by the adoption process after what had happened three weeks before (and the year before that, and all of the empty, waiting months in between), and was hoping, desperately, that this procedure would reveal the answer to my infertility issues so that the donor embryos I had on reserve would lead me to my child.

I was about to get in the shower when my phone rang.  I could see from the caller ID that it was my adoption agency, perhaps calling to check up on me after the debacle of the month before.  I answered, keeping my eye on the clock so as not to be late for my appointment.

“I don’t have any details for you right now, but we have an expectant mother who’s interested in you.”

This was the third time I’d received such a call.  Scarred by two painful failed matches, I could feel skepticism stilling the rising bubble of hope in my chest.  “Okay…” I remember myself saying.  My coordinator understood and said, “I wasn’t even going to call you and was just going to wait until the baby was born, but since the baby could be born any day now, I figured you would appreciate some notice.”  She went on to explain that she had no details for me at the moment but was just calling to give me the heads up that something might be happening.  It was the most cryptic phone call I’d ever received.

On the drive to the doctor’s office, I had plenty of time to consider how I was feeling.  I didn’t know what to feel; here I was, suspended between two vague and insecure possibilities, both of which could potentially lead me to my child or fizzle into the ether before my hope even bubbled to the surface.

I will spare you the details of the procedure, but its results indicated that there was no blockage, which meant no discernible explanation for my endometrial problems.  Fertility-wise, I was back to square one, even more of a mystery to my doctor than I had been before.  When he explained to me what he saw, as I sat up and held the surgical gown close around my body, I was surprised that I didn’t burst into tears.  As painful as it was to know that the door to pregnancy was likely closed for good, I couldn’t stop thinking about that morning’s phone call.  When I explained it to my doctor, he was genuinely excited for me; he’d been working with me on and off for four years by that point, watching one idea or theory after another be dissolved by my uncooperative body.  “I really, really hope this works out for you,” he told me as we said our good byes with a hug.  “I’m not giving up on you if you still need us to figure this out, but I truly hope you won’t need us.”

Over the next few days, my adoption coordinator would call me with updates or some more information about the expectant mom who chose me: T.  T was young, only twenty years old, with a two-year-old son whom she was raising on her own.  Her blood pressure was trending high, so she was in and out of the hospital, each time with the potential to be induced for preeclampsia.  That Saturday, my coordinator called to say, “She had an ultrasound, and she’s having a girl.  I thought you might like to know that.” The third baby girl.

Exactly three weeks after that first call, my daughter was born.

This post is already getting rather long, so I will write the story of how we came to be together, and what that experience was like, in another post.  But I wanted to update for those who find themselves here who are on the same journey I was on.  I am now the mother to a beautiful, smart, energetic, funny, clever, strong-willed seven-month old who is the answer to every wish I’ve ever made.  She’s amazing.  Although we text and I share updates, I have never met her birth mother, but I love her so much my heart hurts.

Ah, yes, the title of this post.  During the time of my adoption wait, I received the same fortune cookie fortunes on two entirely different occasions.  They’ve been in the same spot on my refrigerator for a few years now.  They were a reminder, in my darkest moments–some of which I’ve shared here–to never stop hoping for that one, most sacred thing.  I see them there now, and I can’t help but say, “You were right.”