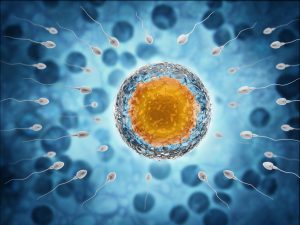 Half an hour before my appointment, I put on a ring from each of my grandmothers and hopped in the car to drive over to UCSF in the rain.  I was called in quickly and the procedure was much like every other time with Nurse Stephanie, although this time the number of sperm was roughly double the usual: 20.88 million.  They considered doing a second wash to weed out more of the slow-movers (a luxury option due to the high number) but decided it might compromise the overall number.  She said it’s great news because you always want more.  She showed me the vial and I saw that he donated on Earth Day.  This seemed significant and memorable.

I meditated. I listened to the cars going by outside on the wet streets. I thought about those 20 million dudes off to the races.  I hoped this egg was it. I felt not much else–no tears, no lightning bolts, no prayers.  Just mostly peace.  When I sat up, the first thing I saw was a calendar and my eye went to October.  Please.  October please.