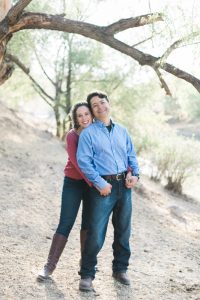 Just a couple of weeks later, I changed my mind about having a potential suitor wait six months to meet my children. Despite my desire to protect them, I didn’t want to commit six months to this relationship, only to have their meeting be a disaster. We  planned for just a quick ice cream outing, nothing too ambitious. Short and sweet.

The day of our date, he knocked on the door as we were doing chores. Sage had been told to wash dishes but was dragging her feet. He went to the kitchen and quietly offered to help. Wordlessly, she handed him a sponge. They washed the dishes together. And by the end of the day, my shy girl was hanging all over him.

Lorelei was even easier. She was instantly smitten, and thrilled to command his attention. Walking home afterwards, she climbed into his arms and laid her tired head on his shoulder.

He told me much later he had been nervous to meet them… and shocked to find that he was instantly smitten.

My heart swelled to see their ease together. I had truly never imagined a partner loving my children. My imagination blossomed and I started to imagine much more than a dinner companion, but a life partner. We quickly began spending nearly all our time together.

Seven weeks later, I decided to keep the kids home from school for a couple weeks, maybe. There was this strange virus circulating the globe…

Sergio’s mom came from Mexico City to stay in Sergio’s house — much safer than an apartment in Mexico City — and he was soon spending all his time with us, instead.

We had terrifying break-in when a vandal came into the house through Sage’s second story window while we were sleeping. Thankfully, we were none the wiser until we realized a purse and iPad were missing the next day. Still, I couldn’t wait to get out of that house. We found a new house together and moved in together, officially. And now we’ve moved again, into a house we adore, and Sergio’s furniture and kitchen items have gradually migrated to the new house.

We are talking, now, about moving his remaining possessions into storage and him letting go of his rental house. And we are buying a used car together! He has generously shared his car with us throughout COVID but “Frida” has reached elderly ages and is ready for retirement.

It’s hard to express what it feels like to go from being a devoted Single Mother by Choice to being a committed family of four.

PART THREE (Conclusion) WILL BE POSTED HERE NEXT WEEK.