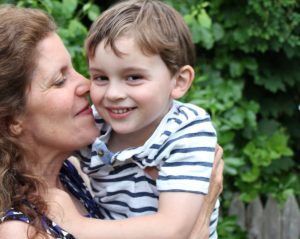 Four years ago today, I held my beautiful little boy for the first time.  The nurse escorted me to the operating room at noon for a scheduled c-section, and by 12:45 I had become a mother. I felt the warm skin and tender breath of my son, as his grandma held him to my chest.  Amazed at how quickly and efficiently the delivery took place, I reflected that in less time than I have spent going to the post office and waiting in line to mail a package, I had a baby.   I was not prepared for the next four years to pass just as quickly.  The happiest and most fulfilling days of my life were those four months of maternity leave when my days and nights revolved totally around my newborn love.  Even through the sleep-deprived and chaotic early weeks, I felt an inner peace and contentment.  How quickly those months and now the years have passed.  I am sitting in my “nursing chair”, as I write.  The glider’s armrests show wear from my elbows, first clumsily and then competently placed as nursing became more established. The chair now most commonly serves as a resting place for my clothes before they make it to the wash, but today I felt an overwhelming desire to just sit and rock.

My son is one of the many miraculous in vitro babies.  I remember my reproductive endocrinologist telling me that we had a good chance of this working and that while she could not promise, she would do her best for this to result in my having a “child”.  I was particularly struck by her choice of words.  I was dreaming of having a “baby”.  As my son quickly grew from infancy to toddlerhood, my doctor’s wisely chosen wording came back to me.  In the proverbial blink of an eye, I no longer had a baby.

I remember the simple joy of taking my newborn baby for walks in the stroller – the giddy expression on his face when he felt the first ocean breeze; wide eyed, looking around taking in all that was new in his surroundings.  As he got bigger, my walks got longer.  We hardly missed a day.  Walking through city streets, surrounded by people, traffic, and urban chaos, all I took notice of was my son.  Then, my twinge of sadness when I had to adjust the stroller to make it forward-facing.  I could no longer fix my gaze on his every expression.  What a hard realization that it was now more important that my toddler have a view of the bigger world, rather than just his mommy’s adoring eyes.

For months our morning routine started with breakfast followed by “gym”– a floor mat with hanging toys for which he could reach and grab that provided infinite hours of fun.  A few toys, some tickles and giggles, a nice walk and of course lots of naptime were enough to fill our days.  This was bliss.  I would have been content to live this way forever.

The rhythm of our days changed, as my little boy outgrew his naps.  Admittedly, I missed that time when I too could rest for a bit.  But much more so, I relished the extra waking hours I had to enjoy with my son.  Whatever time I had with him never seemed to be enough.  And I feel that only more acutely as he grows up.  As I drop my son off at preschool, I am already looking forward to picking him up.  And the weekends pass too quickly.

I never thought that Four would seem such a big number.  Each birthday is a milestone, but somehow this birthday seems monumental. My child’s personality is blossoming, and he is becoming more and more his own person.  He is happy, caring, sensitive, smart, serious, funny, silly, creative, eager, inquisitive, beautiful and loving.  He brings me new delight daily, still I cling to and lament each passing phase.  When my little boy started saying “by myself”, it seemed merely a statement of principle.  Now, he means it!  In recent weeks it seems that almost daily he is doing something new by himself.  I am more than happy and grateful for my son’s growing independence, yet deep down a small fiber of my heart aches that he no longer needs me in the same way he used to.  I know it is my job to launch him into the bigger world and I will.  I would just like to hang on a bit longer.  Happy Birthday, Uri, my love.