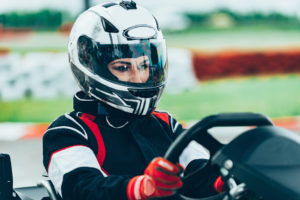 Go back with me to eight years ago. My boyfriend of a year-and-a-half and I had The Talk. I’d thought we were firmly on the same page about commitment and family. Problem was, there didn’t seem to be any movement toward that. I hadn’t even met his family. So I asked him about our future.

He looked panicked– not the reaction I was hoping for. He stalled for time, telling me, “can we talk about this later, baby? The game’s on.” Again, the banality of this scene made me want to kick myself. I couldn’t believe I had become this person.

As he kept one eye on the hockey, I told him that we were both 40, and I was ready for a real commitment and a baby. He adjusted his junk and half-turned to me, “Okay, I’m getting a handle on this,” he said. He told me that sure, he wanted commitment and kids too… just not yet. He told me we were both “on the same road” but he was in a “regular car” and I was moving really fast, like in a “supersonic futuristic car.”

It was in that moment I knew I had a big choice. But I made it in a split second, almost like my body made it for me. I told him that if he wasn’t ready, I respected that, but I’d have to move on.

That finally got his full attention. “Are you breaking up with me?” he said, incredulous. “But we get along so well! You can’t break up with me!”

Oh yes I can, I thought. I can, and I will. And I did. That was my first step toward my getting what I knew I always wanted but never thought I deserved: love.