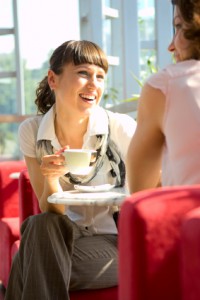 So I had finally made the decision to start trying to get pregnant on my own.  I had found myself a Reproductive Embryologist, a handsome Italian doctor with full-sleeved tattoos on both biceps. I wrote the story in my head of how my doctor would inseminate me and then become my lover, my partner, my child’s father.  It definitely seemed like the rom-com I had been waiting to star in my whole life.

I was sitting at my desk at work, just a few days away from insemination, and all of a sudden, an invisible brick fell out of the sky and hit me on the head. I could almost see the pebbles of concrete rolling down the sides of my hair and the dusty clouds billowing up around me like in a cartoon. Blamo. No way, I thought. No f-ing way.

You can not do this, I thought. I could not be a single mother. I would be alone and miserable. I saw an image of myself in a gloomy apartment, alone at two in the morning, with a screaming, unreasonable, miserable a child. I would be dejected and more alone than I could imagine. No, no, no, no, no.

I canceled my insemination and then immediately got the flu. It sucked but at least I had time to calm down and think. I kept weighing my options. Did I want to try? If I didn’t, would I be okay without being a mom ever?

I had been looking for a bigger apartment– which I’d need whether or not I became a parent–  and I went out to a Sunday open house. It was a sunny day, and as I walked around the lovely streets I spotted a woman I knew pushing a stroller.  Amazingly enough, it was an old friend who had decided, like me, to have a kid on her own.

We said hi, and I quickly told her how I had been thinking of calling her to talk about single motherhood. (What I love about women is how we can get right down to business. No bullshit, just the issues, please.) She said she’d love to talk with me. How about we go for a walk?

So we got coffee and I walked her and her incredibly cute kid home as she told me about her experience.  Then we got to her apartment, which was sunny and welcoming. Her son played on the floor while she folded the hand-me-downs she had just gotten from some friends she had met for brunch. It all seemed so human.

And I thought, okay, so maybe my vision of single motherhood isn’t all there is to it. If she can do it, maybe I can too. And I knew deep down that I wanted to.